By the time we got to Kashawe, we were tired of game drives, having been on more than 20 already. We’d seen everything except a painted dog and a rhinoceros, and we didn’t expect to see either of them at Kashawe. In fact, it looked at first like we wouldn’t see many animals at all, at this, our last camp.

Our hopes had been big when we heard that Kashawe was new, only open a couple of weeks. Each of our previous three camps had been nicer than the last, starting with the first camp, Baobab, which looked out over the Chobe River floodplain and where elephants walked next to our cabins at night.  Right away, though, we saw that this Zimbabwe camp was different. Dry, without what Alexandra Fuller called “the early morning explosion of bird sounds” that had greeted each day at the other camps. The vegetation was downright sad – the leafless trunks of mopane trees were black and straggly and very few stood above five feet. Elephants had used their powerful trunks to break all the trees down to a consistent height and many of the trees would not survive. Now, though, the dark stalks were dense enough to still hide most animals from us.

It was dry, so dry. The camp pumped water from a well in the valley below, but there was no surface water to be seen. Everything was covered in a fine sandy layer of brown, including ourselves after game drives. One day we slowly bumped along for miles, over rutted dirt roads to a large watering hole. We had our lunch there and spent the better part of the day, even our chattiest members in quiet awe of the animals as they came and went. We heard the chacma baboons bark “aauck! aauck!” to warn others about the crocodiles. We saw a herd of elephants arrive in a cloud of dust causing a dozen and a half hippos to silently file out of the water and stand on the far beach with their backs to the elephants, as if to say, “we’re not lookin’ for trouble.” We watched more than a hundred vultures demolish a dead baby hippo in less than twenty minutes.

Even though we were mesmerized by the activities at the watering hole, many of us expressed later that we could have skipped that last camp in Zimbabwe, and, instead, enjoyed another couple of days at Victoria Falls. But, then, if we had skipped Kashawe, we wouldn’t have met Mafuka. We had been impressed by all of our guides. No matter what we asked, they knew the answer – common names and scientific names too, of trees and plants, birds and animals. They told us small anecdotes about animal behavior, and amazed us with their tracking skills, not only identifying animal tracks but estimating what time of day the animal passed by.

Safari guide Mafuka, though, was in a class by himself. Twice as old as the other guides, this stocky man with a kerchief tied around his head laughed that, at almost 70 he was still working because he had so many children. We never did pin him down exactly on the number – he had maybe ten of his own, but the total he supported was somewhere around twelve or fifteen, depending on whether he counted his brother’s kids he was helping to raise. His brood definitely included the two children his daughter had left when she died of HIV.

Other than the fact that he drove to the air strip on the last day without us, forcing his co-worker Victor to pinch-hit and give us a ride, he didn’t seem to act old at all. His mind and body were as fit as a man half his age. His cloudy eyes sparkled when he shared his knowledge of the bush, and he could see birds in far-off trees and lions in the dry grass that we could see only with our binoculars, and then only when he patiently told us exactly where to look. The camp sat atop a long ridge and one day, I saw him looking at the vast wasteland that lay below. “What are you seeing?” I asked. He gave a non-committal reply, but another of the travelers summed it up for us all, saying, “From the look in his eyes, I would guess he’s seen everything.”

He showed us how sparrow weavers nests had two doors, so the birds could escape their enemies, and what the inside of a termite mound looked like after it had been opened by an anteater. Just like his mother had taught him, he made a sisal twine from shreds of a baobab tree, by rubbing the soft strands along his muscular leg until tightly coiled, then adding more and more strands to make a nice thin rope that he fashioned into bracelets for each of the women, saying as he put it on our wrists, “Now, we are engaged.”

Bits and pieces of his life came out in the three days that he showed us the hidden splendors in this dry, wasted land. Mafuka and Wallace, our primary tour guide, were both members of the Shona tribe. Wallace had tribal beliefs, like a missing tail on a gecko meant his wife had prepared a love potion for him, but he was modern too, agreeing with his wife that there would be only one wife in their family. Mafuka, though, was of another generation, and had three wives. Some of our group heard that he had once had a fourth wife, but divorced her because another of the wives was jealous of her young age. I didn’t hear that story, but I did hear him say that one of his wives was addicted to chewing tree bark, which had become a habit when she was pregnant. Not too different, I thought, than pregnant women in certain parts of the U.S. who chew kaolin or clay to make up for some missing nutrient.

Mafuka needed three wives to handle his large family and all the chores that went along with his farm. Leading photo safaris was a seven-weeks-on, two-weeks-off job, which meant that his wives and kids did the fieldwork: raising corn, tobacco, soy beans, and ground nuts (peanuts). His wives grew and pressed sunflower seeds for oil and tended several fruit trees. He mentioned having goats, cows, and chickens – I realized that his wives worked hard. I wished later that I had read Peter Godwin’s When the Crocodile Eats the Sun before our trip rather than after. The book is about one family but also details how successful white farmers lost their lands when Rhodesia became Zimbabwe. I would have asked Mafuka how he came to own such a large farm. Nevertheless, in this country where a newspaper article quoted the government as saying 75% of its population will go hungry in 2014, Mafuka’s family ate well.

On the last day that we were going to be in the bush, Mafuka led a group of us on a short walking tour near the camp. Rifle in hand he pointed out a lion ant hole, and a patch of trampled grass where cape buffalo had skirmished with either a lion or hyena the day before. He identified the various animal feces left here and there – the dark coiled pile of buffalo dung was easy to distinguish from hyena scat, white if the hyena had been eating bones. More difficult was telling porcupine from kudu. He could identify every pile.

When he came upon a small mound of dry impala dung, he picked up a handful. He stood there jiggling it in his hand, much as some men jiggle loose change in their pockets, while he talked a bit about the impala, looking from person to person in our group. Perhaps he was assessing just how open our minds could be, or perhaps he was getting his mind and body ready for what he was about to show us. He told us how kids often had spitting contests with dried impala pellets, still looking from person to person to watch our reaction. Then he went on to say that he had taught himself to swallow and regurgitate the impala dung, in order to spit farther. It had taken him three years to perfect the technique.

He handed a stick fashioned from a palm tree to Gary, one of our group, and told Gary to hit the pellets with the “bat” as he spit them. Mafuka said, “six pellets,” and proceeded to swallow them quickly one at a time – one, two, three, four, five, six – then opened wide and showed us that they were nowhere in his mouth. Then he burped them up and spit them out, one by one, while Gary swatted at them from ten or twelve feet away. Gary couldn’t hit any, of course, because they were about the size of a kidney bean. Later Gary and others of us had more luck batting at walnut-sized pellets of giraffe dung that Mafuka pitched underhand.

As we were walking back to camp, Mafuka asked, “What do you call a contest where you spit impala pellets, play cricket with giraffe poop, and taste elephant dung to identify the sex?” We took his word for it that female dung tastes sweet, and male salty. He laughed his answer: “a shit safari.” I decided that African boys may live closer to the earth, but their humor is like that of boys everywhere.

As we waited at the airstrip out in the middle of nowhere for a bush plane to take us to Victoria Falls, Mafuka told us excitedly how he had heard of a woman in South Africa who also could swallow and spit impala dung. He was going to meet her in a couple of weeks to have a contest. We wished him luck and promised we’d watch for his name in the Guinness Book of World Records. What a way to end our two weeks in the bush! 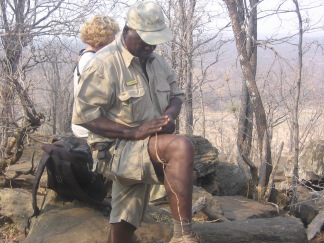