We arrive in Germany two days early, in an effort to avoid jet lag on the bike trip.  Having never been to Berlin, we stay in the city center, within walking distance to all the main sights.  And walk we do, putting the miles on our feet seeing everything.

Right away we learn that bikes have a lane next to pedestrians rather than in the street.  Irv has to pull me out of harm’s way a few times before I learn there’s no “on your left” warning––the Germans expect you to know the rules and to stay in your lane. 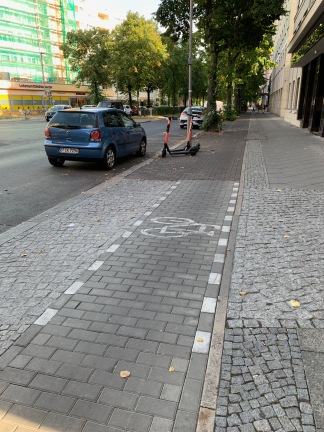 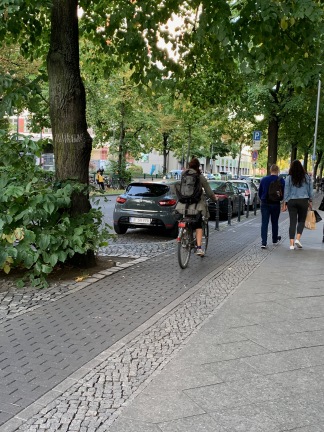 On the first afternoon, we stumble across remnants of the Anhalter Bahnhof, a major train station dating from the 1800s that, under the Nazis, became the departure point for thousands of Berlin Jews taken to Theresienstadt and from there to extermination camps such as Auschwitz. (I knew we were going to tour the concentration camp Terezin on the bike trip, but I didn’t know yet that Terezin is the Czech name for Theresienstadt.) The station was bombed in WWII and has since been torn down, and the remaining gate, an imposing structure standing next to an old rose garden, is now a memorial. 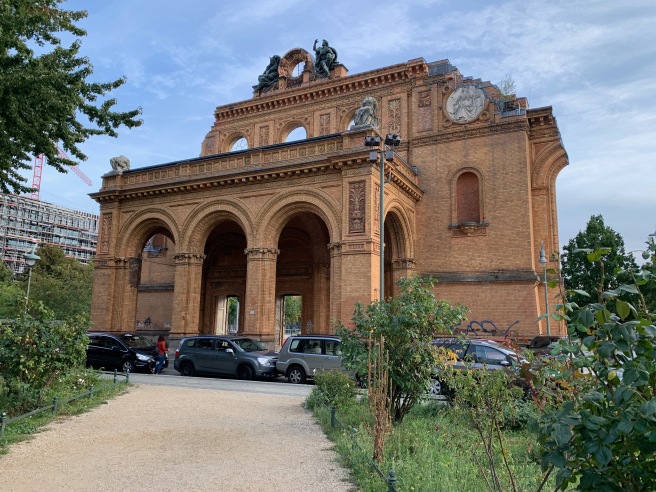 Continuing on down Stresemannstrasse, we find Potsdamer Platz, where new modern and tall buildings are prevalent and the businesses echo success, and its neighbors, the Leipziger Platz and the Berlin Mall.

We haven’t been to the Mall of the Americas, but the Berlin Mall is pretty impressive: four floors and two adjoining buildings with stores, restaurants, and activities.

We have dinner at a so-so Italian restaurant––I don’t know the name, but I wouldn’t recommend it anyway.  Eating outside on a beautiful day was the best part.

After perusing brochures and websites of several biking and walking tours, we choose the Discover Berlin tour offered by Original Berlin Walks, the main reason being that they offer a tour that begins at 2 PM, which means we can sleep in and take our time getting to the meeting place at Hackescher Market, a 4km walk from our hotel.  We get lost, and finally we put the Market into Google maps, arriving just as the tour starts.

Walking over, we happened on the Topography of Terror Museum, an impressive museum dedicated to trying to understand how something like the Holocaust could even happen.  The indoor/outdoor displays are located on a large site, headquarters of the Gestapo, SS, and Reich Security from 1933 to 1945.

We wanted to spend more time than we had, but luckily the tour includes that museum as well so we get a second chance to visit.  Many, many museums and monuments in Berlin are dedicated to Germany’s shame and to informing and educating the current population about the horrors of the war.

In contrast to those museums and remembrances, though, walking over to the meeting place, we also happened upon a demonstration parade filled with hundreds wearing orange shirts and carrying orange balloons and placards.  They followed a platform truck using a loud speaker, whistles, and drums aiming to exhort the group into a furor over something.  The insistent and urgent noise-making used to incite the crowd made us feel uneasy.  We noticed an occasional arm raised straight out in front with the hand in a fist and thought the demonstration might be anti-immigrant from the few words that we saw.  We learned from our guide later that such demonstrations and parades are quite common on Saturdays in Berlin, and she confirmed for us that orange is the sign of the more conservative political party.  She also said it is legal for people to raise their arms out with a fist, but the Heil Hitler sign with the hand straight out is forbidden.  The scary part: so many families walking with small children in such an intense environment, no matter what their cause.

Once we find it, the walking tour turns out to be excellent––if you go and happen to get Liz to be your guide, you are very lucky.  A little person with very short legs, a strong voice, and a wealth of knowledge, she walked so fast that we struggle to keep up.  She showed us the major sites:

We walk down the famous Unter den Linden  and see Humboldt University, the oldest university in Berlin.  Former faculty and notable alumni include 20 Nobel prize winners among the eminent philosophers, sociologists, artists, lawyers, politicians, mathematicians, scientists, and Heads of State such as Einstein, Karl Marx, and the Brothers Grimm.

The University was the site of the 1933 book burning by students and professors, which the Fascist regime used to their advantage and where Goebbels spoke. What was lost and burnt were the books by those who the Nazis ostracised and persecuted, who had to leave the country and whose stories were no longer allowed to be told.

If we had an additional day or two, we would have tried to go up into the glass dome atop the Bundestag, where you can look down on Parliament and also see a 360-degree view of the Berlin skyline.

We would have liked to spend some time at the Hackescher Market and visit more of the museums, especially the German Historical Museum, but we ended our day happy, with the best meal:  a mixed sampler plate for two at a Syrian restaurant called Yarok across the street from the Topography of Terror Museum.  Our guide Liz recommended it, and told us that Middle Eastern cuisine is very typical “Berlin” now.  We loved everything on the plate.

If you have a chance to take the walking tour with Original Berlin Walks, and get Liz as your guide, you won’t be sorry. 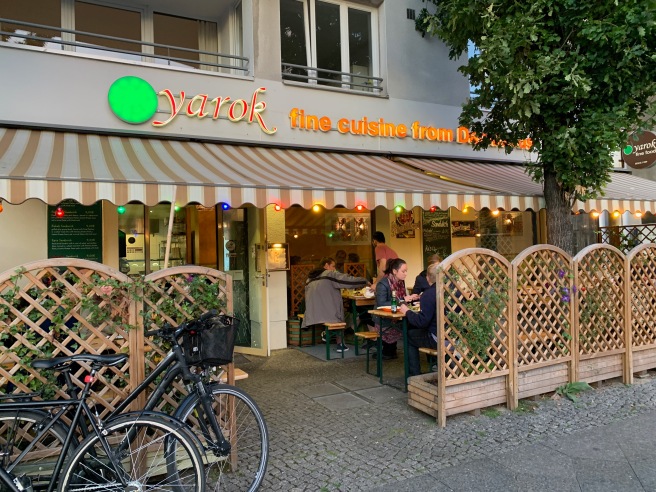