Ushuaia: the southern-most city in the world and a favorite place I was most happy to visit again.  This little city impressed me the first time we stopped on our way to Antarctica; that time we flew in, and left on a small ship to Antarctica.  The second visit impressed me even more; we arrived on a small ship that we boarded in Punta Arenas, and entered Beagle Channel and the Ushuaia harbor from the Chilean side of the Grande Isle of Tierra del Fuego.  Lovely––no matter how one gets there.

Both sides boast parks with equally beautiful scenery.  Ushuaia sits of course on the Argentine side, and for that reason alone, I think I favor the scenery of Tierra del Fuego National Park of Argentina.

This active and growing city, filled with warm, friendly people, is nestled against the mountains along the Beagle Channel, which never freezes.  Even though Ushuaia is the closest city to Antarctica, it’s never unbearably cold.  Summer-time highs (December and January) range in the mid-fifties Fahrenheit, and the winter highs (June, July) are in the forties.  Not a lot of difference.  What is different, is the amount of sun.  The residents might not like the early dark of winter days, but everyone we talked to seemed to love the year-round cool weather.  Perhaps having homes warmed with low-cost heat helps.

Argentina’s decision in the late 1800s to establish a penal colony, is what developed the outpost of Ushuaia into a city.  The prisoners themselves constructed the facility from 1902 to 1920; the prison was active until 1947.  Much of the town surrounding the prison was also built by the convicts, all of whom had jobs inside or outside the prison.  An important part of infrastructure development for the community, the prisoners built streets, bridges, and a railroad, and provided services like a printing shop and fire station.

Now a nice tourist stop, the former penitentiary and its grounds house the Maritime, Antarctic, and Marine Art Museums in addition to the Prison Museum itself.   The Maritime Museum, in a re-located lighthouse, includes a map showing sites of hundreds of ships lost in the vicinity of Cape Horn.  (You might read negative comments about the museums––reviews are mixed.  I think it’s a worthwhile visit.)

The scenic harbor and active port are a gateway to the Antarctic area.  Tourism is big here with nearby mountains and the national park, and tourism means plenty of choices in hotels and restaurants.   The local specialty is King Crab. 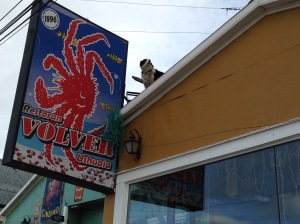 We had ours at Freddy’s.  It came recommended as a good restaurant that is open all day (many restaurants don’t open until 8 PM for dinner).  I ordered crab soup and Irv had king crab “natural,” a pile of freshly shelled king crab with drawn butter.  Just as our food was nearing the table, I hear, “Oh, no. Don’t lean back,” from a fellow traveler seated next to me.  Then “Don’t look,” from the young waiter, who was frantically wiping with a napkin.  He had spilled buttery crab juice on my down jacket that hung on the back of my chair.  That evening I spot-washed the jacket in the hotel basin to avoid smelling up my suitcase.  When we were leaving the restaurant I didn’t see our young waiter anywhere, he may have been hiding out in the back room.  The crab soup was delicious.

The Chilean side of Tierra del Fuego provides rugged beauty also––more about that later––but I most enjoyed seeing Ushuaia again and hiking the Argentine park. 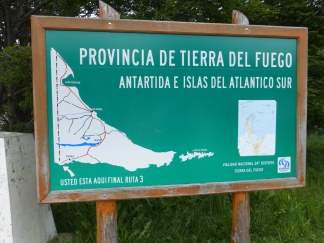 Maybe because it looked the way the end of the earth should look. 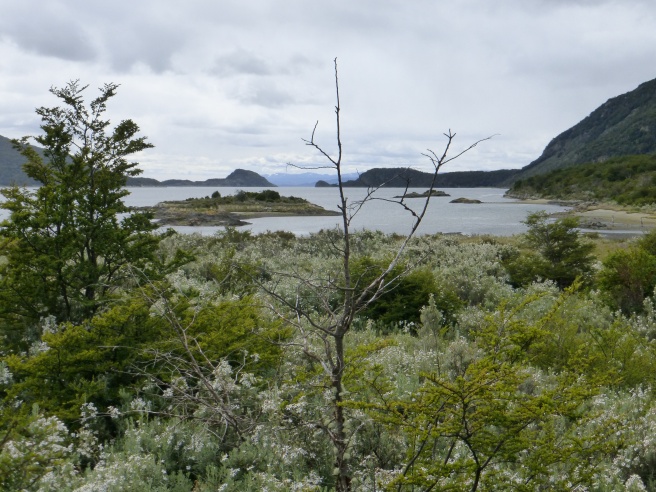