We’re wined up, having finished the Prosecco, the last half bottle of red, and some white left from days ago.  What to do with the remaining five bottles of beer and an unopened bottle of wine?  Too much to leave for the maids.

Three days before Christmas and we’re heading to Maui after five days at Kona.  Still in mainland travel mode, we expect long lines at airport Security and now we have the additional problem of surplus alcohol.  We start to pack.

Carol discovers that a beer will fit in her tennis shoe and finds a bag of dirty clothes to cushion the wine bottle.  Her suitcase, a long duffel left over from an Africa trip, is flexible and big enough to accommodate her fins and snorkel, as well as the booze.

Irv wrestles with another two beers, wrapping them in crumpled paper before tying them in plastic bags and fitting them in the middle of his suitcase. I squeeze in the last bottle, plus leftover kumquat marmalade, which is much too precious to throw away.

“Let’s toss the butter,” Carol said. “It may become liquid, and TSA won’t like it.”

I don’t want to buy another whole tub of butter at the next stop, and waste––what? Maybe a buck-fifty.  “No. I’ll put it in this resealable bag that the macadamia nuts were in before we ate them all.  I can put it in with my dirty clothes.”

Travel day––our flight is at 11:55.  By 9:15 we’re ready––dishwasher started, condo keys turned in, suitcases loaded. We drive the twenty minutes to the Alamo car return.  I know our airline is not in the main terminal: “Can you drop us off at Mokulele Airlines?”

The shuttle driver loads our bags.  “I’ll stop there first.”

“Aloha.”   A smiling woman wearing a red shirt with a big white hibiscus, greets us as we walk up a short ramp to a shed.  The banner on the wall says Mokulele Airlines.  “Can you show me a picture ID, please?” Then, “Put your suitcases one at a time on the scale.” It’s a small scale sitting on the floor between two kiosks.  She jots down the weights, and piles the suitcases to be checked behind the second kiosk.

“Now, one at a time, step on the scales, holding your carry-ons.”

We each do that too.

She jots down more numbers with our names.  “Thank you. Have a seat.”

The small waiting area, festooned with colored lights and felt stockings with names of the airline’s employees, hosts a plastic, blow-up snowman.  He’s tied to rocks, holding him steady against the gentle breeze moving through the open-sided room.  The breeze feels good, but doesn’t do much to cool the 85-degree weather.

Karen laughs. “Do you realize we’re through Security? We could have carried a six pack!”

The waiting area fills up––twenty people make a crowd––and empties.  One group of four meet a pilot who’s taking them on a plane tour; more people leave when the lady in the red shirt calls their names.

We wait. I use the restroom. Karen walks to the outside to take pictures of the planes, their red tails labeled with white hibiscus flowers.  Irv and Carol read brochures about Maui and Carol tries to buy a Mokulele shirt.  (You have to work for the airlines.)

Finally at 11:45, ten minutes before take-off, a young man approaches us: “Follow me.” He leads us to a gate and calls our names: Karen and Carol, row 1. Irving and Evelyn, row 2.  A family of two parents and two small boys join us from a picnic table outside where they were waiting.

Aloha was beginning to make sense. No lines, No TSA. No stress, with Mokulele.

We walk out to our plane, climb up the three or four steps and, stooping, walk to our seats, one on either side of the aisle.   We take off with two empty seats in this ten-passenger plane. 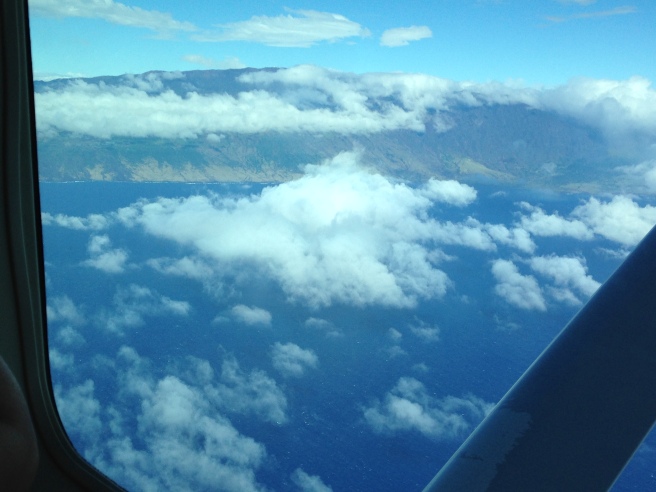 We could almost see the fish swimming above the coral reefs. It’s beautiful. The last time we were on a plane this small, we looked down on herds of zebra and impala in Africa.

When we disembark, one of the two pilots asks the boys, “Do you want a picture by the cockpit?”

A man in a fluorescent yellow vest pulls our suitcases onto a little cart, and we follow him into the Kahilui Commuter Terminal.  Just a few steps more and we’re outside again. Our suitcases aren’t dripping.

“The rental cars are over there,” he said, pointing.

We drive to the condo and open our suitcases.  The beer is cold enough to drink.