And a Twenty-four Hour Nurse at the Hotel Nacional.

Our last night.  We’re scheduled for dinner at a paladar, a private home restaurant allowed to serve meals in exchange for CUC’s.  In this country with two separate currencies, US dollars or Euros can be changed only to Cuban Convertible Pesos, spoken as C-U-Cs or slangily as “coocs” (don’t say cuke, and don’t say cook; think a dove’s “coo”). CUCs are worth 26 to 27 Cuban Pesos, which is how the government pays locals. Paladars cater to travelers and tourists, and are paid in CUCs.  The vast majority of Cubans eke out a living with only Cuban pesos, and therefore could never afford to eat in a paladar.  But we are Road Scholars, following a HavanaTur guide on a People-to-People tour focused on arts and culture, and eating at approved paladars as well as government-owned restaurants.

We shower and dress, and pack a bit––we leave this historic hotel tomorrow.  I use our battery-operated SteriPen to decontaminate a bottle of tap water, so we will have plenty for tooth-brushing when we return. 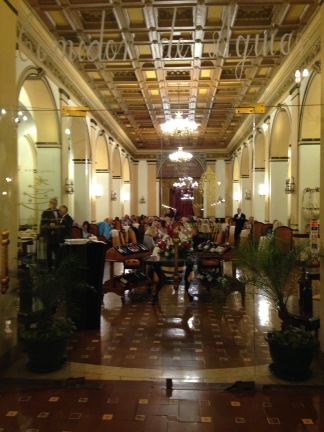 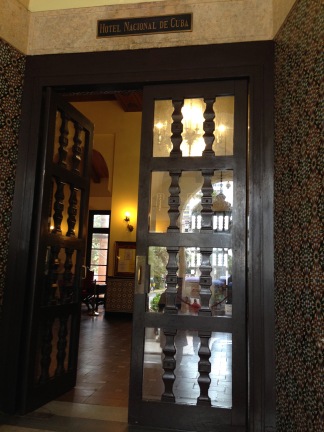 We are being especially careful here, where even the locals boil the tap water.  We walk under the chandeliers, past the polished wood windows of the registration desk, and down the tiled steps, just like movie stars of the 20s and 30s.  This once-grand hotel is again a showpiece.

A surprise––we are being treated to taxi rides in vintage cars in place of a bus. Cool!  Irv and I are led to a two-door, red and white convertible.  Overhead clouds are threatening and I’m glad that my bag holds a small fold-up umbrella, especially when we see raw metal bars folded down behind our heads and realize that this old Pontiac no longer has its ragtop.  Our car is a genuine convertible––the car of choice for use as a taxi––not a hardtop torched into submission, as is the case with many convertibles.

Our proud, young driver looks hip, with his baseball cap on backwards and a Bluetooth stuck in his ear. We bump and bounce along behind the other cars, the young driver wrapping his arm around the steering column to press a horn button installed post-production. Beep-beep-beep. He makes more noise than any other car of our group;  we could be newly-weds in Ohio of the 50s.  He doesn’t speak, except two answers: “Fifty-one Pontiac” and (when asked if the engine is original) “No. Russo.”

Maybe it’s from being belled or maybe from smelling exhaust fumes, but the ride seems long; our line of taxis stops curbside at a park and our group mills about.  Even though we don’t see our guides, Irv and I assume we are at the paladar and Irv tips the driver one CUC.

Some people stroll a bit but we don’t want to go too far because we think we’re about to eat.   We learn later this was the John Lennon Park.  Then everyone starts getting in the cars again. Our polite young driver reaches over the door to release the handle, and after we are in, gently lifts the passenger door to close it.  We take off.

We learn later that two of the drivers, one a former history professor and the other a former computer programmer, abandoned their jobs to work as taxi drivers, making more money and having more fun.  They drive well-maintained cars and point out embassies and other notable buildings, explaining to their riders how the John Lennon Park was a popular spot for young people who would gather there and sing, especially Lennon’s Imagine.  Irv and I enjoy our ride, but hear only a lot of horn honks, with no commentary.  We don’t tip the driver again when we reach the paladar. It’s been fun and the rain has held off.

The restaurant is a beautiful, fifth-floor apartment. All doors are closed and we see no other residents.  They are here, though––the housing shortage would not permit an unoccupied building.  Maybe they have jobs in the restaurant.  If anyone resents tourists tramping up and down the stairs all evening, they don’t complain.

The waitress lists four dinner choices: grilled mahi-mahi; grilled mahi-mahi with shrimp on top; seafood platter with langosta, shrimp, and fish; or beef. To Irv and me it’s a no-brainer. We’ve been told that this island was known for its lobster and other seafood, and the grilled lobster we had days earlier in old Havana was excellent. The seafood platter is the most popular dish among the group.  Jerry, a fellow traveler from Minnesota, chooses the sirloin, and I wonder to myself why anyone would come to an island country and order beef.  The meal is good, not great; the fish is dry.  Jerry seems to enjoy his beef.

The bug hits me hard.  The uncomfortable feeling starts soon after we leave the paladar, and by the time we arrive back at our room, I feel very bloated.  I brush my teeth and get ready for bed. Perhaps my preparation and caution have been for naught, I think, as I pull on an old T-shirt and climb into bed.

“I don’t feel good at all,” I say, just before running to the toilet to vomit.  The urge is sudden, undeniable, but it does make me feel better to get rid of whatever was offending my stomach.  I stand up and hold on to the doorframe.  I feel weak and see a few sparkly stars.  I head toward the bed.

My husband, brushing his teeth in the bathroom, hears the thud.

It feels so good to lie down.  I turn to my side, my preferred sleeping position.  Then I hear my husband’s voice. “Honey, what happened?”

“Head…hurts…little bit,  ‘s OK.”  With his help, I pull myself onto the bed and snuggle down.  For less than thirty minutes.  Then another uncontrollable urge, a run to the toilet and a forceful vomit.  I feel better.  My husband helps me back to bed, and I snuggle down.  Twenty-five minutes later I’m again hugging the ceramic throne.  This goes on all night long.  After the first couple of hours I’ve regained enough strength to get in and out of bed by myself.  By 5 AM I’m exhausted, but my stomach continues trying.  I pull myself together, take a shower, and dress.

I’m glad our guide had thought to tell us that the hotel’s doctor and nurse sleep there, and that the medical office is open 24 hours. “I’m taking a 10-CUC note,” I say to Irv.  A tip is one of the only ways that a professional such as a nurse can participate in the desired CUC-economy in this country where an un-educated chambermaid getting tips in CUCs makes more per month than a teacher or nurse paid in pesos. The elevator stops at the sixth floor for me.  Inside stands a pleasant-looking black woman in a white uniform and small white cap.

“Are you the nurse? I was just coming to see you.”  I follow her into her second floor office.

She’s carrying a five by eight piece of paper that contains other names from our group that she had been visiting throughout the night.  I don’t see Jerry’s name.  She adds my name to the list. “Did you eat the langosta?”

It tasted pretty good, the first time around, but not in the reverse direction.  Some of the shrimp and lobster bits are still hanging around in my sinus cavities, where they were propelled during the night-time exercises. I may never eat lobster or shrimp again.

She nods, and gives me an injection in my rear. “Do not eat or drink anything for three hours.” She hands me a half dozen packets of electrolyte powder to add to water and drink after that. I give her the 10-CUC note, and she smiles big.  She looks as happy to get 10 CUCs as I am to get some relief.

I sleep the three hours on the bus to our next hotel at the beach resort Varadero.  I miss the talk about the educational system, but there’s no way I can stay awake.  The shot works: the next day I feel 100% better.  I can’t drink the electrolyte solution. It tastes worse than a colonoscopy prep.

Our Road Scholar guide is sure it was from the farm-to-table lunch we had the day before in Viñales, which was the first time people in our group got sick.  The bathroom there had no running water to wash hands or flush the toilet; a worker stepped in with a bucket of dirty water every other person or so and we used hand sanitizer.   To me, though, my case seems like classic food poisoning that hits two hours after eating.  I’m just glad my body heaved it.  I wouldn’t want that poison moving through my system.

The last two days we spend at a relaxing, all-inclusive resort hotel.  By the time we leave Cuba, I’m feeling normal again. Only when I’m home and look in the well-lit bathroom mirror, four days after my fall, do I see that my forehead is a yellowy green.

Oh well, the pictures and memories of a fun trip will last longer than the bump on my head.

2 thoughts on “Our Final Night in Havana”