I’ve only seen Part I of Ken Burns’ documentary on VietNam, but it caused me to remember our wonderful trip there, and the day a former Viet Cong hosted us in his home and proposed a toast with my husband who served a year in that war.  This is a summary of our trip that I wrote upon our return.

We landed in a different world – a fascinating world! Farms grew right up to the cities; women carried fruits and vegetables, and sometimes even the makings of a street-side restaurant, in baskets hanging from shoulder poles; scooters filled the streets, along with a cacophony of honks and beeps. We learned everything we needed to know from Vu, our capable and patient OAT tour leader. The first day we learned how to cross the street in Hanoi – like sticky rice; keep moving; slowly, slowly.

Later, when we enjoyed spending 20,000 dong (~ $1, US) to buy four different vegetables in a market, we learned how difficult it really is to hear and repeat the Vietnamese language. We found out that Vu’s name, pronounced evenly, means melody. We had been calling him a beast (accent up), a whir (accent down), a feather (question), universe (tilde) and crop (dot below). He answered to it all, with a smile.

We learned about religions, about homes and cultures, and how to make spring rolls. We walked on beautiful mountains, swam at peaceful beaches, and ate food so fresh that my mouth waters even now. Every day brought a new surprise: tour buses and gifts to the children were prohibited in Montagnard villages; loudspeakers blanketing the countryside shouted government propaganda; capitalistic industriousness was everywhere in this Communist country; former “South” as well as former “North” Vietnamese revered Ho Chi Minh, for his simple life and for uniting their country.

An excursion to the island village of Tho Ha was especially memorable. Motorbikes headed for the Hanoi markets and laden with bags of rice, rice noodles, artwork, even one carrying dogs, had to be helped up the steep ramp before we could crowd onto the ferry for the ten minute ride across the river. On the island side, tall bamboo screens about a foot wide lined the landing dock and were propped everywhere in the village. We could hear a soft crackling sound – rice paper drying in the sun. Three villagers were making charcoal briquets from a thick sludge of coal dust, but otherwise all production centered on rice and rice paper. 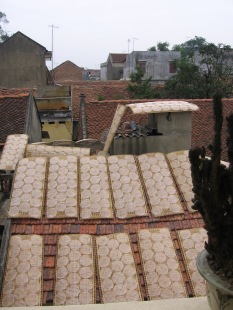 Everyone was friendly. Old women smiled wide to show off their red lips and mouths filled with blackened or missing teeth––effects of betel nut chewing.  Children played and nibbled on snacks made from rice paper scraps seasoned with chilies and salt.

After walking a couple of blocks, we entered a beautiful home, past a young woman in the tiled entry tying dried rice paper into bundles. In the doorway, her daughter, our host’s grandchild, danced around, happy to have so many guests in their home. Our host, Mr. Viet, welcomed us and motioned for us to have a seat. A low settee and an abundance of plastic stools were set up around a low table holding a ceramic carafe of rice wine. Beautiful flowers decorated the family altar, paying homage to deceased relatives.

Vu translated while Mr. Viet told us his story. First he pointed out a photograph hanging high on the wall – a celebratory picture of him taken in 1975, on the day that Saigon was, in his word, “liberated”. We could all remember that day, when helicopters whisked away desperate South Vietnamese officials from the American Embassy rooftop. Mr. Viet told us how, long before that liberation day, he had spent six months traversing the mountains on the Ho Chi Minh Trial to get to the Saigon area, and then how he had lived in the dark and confining Cu Chi tunnels even longer. After the liberation of Saigon, he had continued to serve in the North Vietnam Regular Army, and fought against the Khmer Rouge in aid to the Cambodian government.

He had an interesting history, which he told to us in a matter-of-fact tone. But the most striking thing about Mr. Viet was his gracious manner. He offered us small cups of rice wine that he had made himself from rice that he had grown. It was very good – like a top-grade “sake”.

When he found out that my husband Irv had served as a US soldier in what they call “the American War”, Mr. Viet insisted on drinking a toast with Irv – to the end of the war.

“Aren’t we lucky,” he said, “to live in a time of peace. We did our jobs; it’s over now. Now we are one country with no war. We are all thankful to be living with no war.”

Then he serenaded us, playing multiple traditional stringed instruments that had been hanging on the living room walls. In his friendly way, he foisted instruments into our hands, including us in his celebratory music that produced even more jumping around by his pre-school granddaughter. Then he shared a pipe, smoking a special tobacco with any of us who were game.

We left Mr. Viet and his family, and walked next door to the house of his brother, Mr. Wang. “Their family name is Nguyen,” Vu told us. “The same as my last name, and the same as millions of other Vietnamese. That’s why we use the first names.”

Mr. Wang appeared to be a medicine man, or maybe a pharmacist; he had jars of cures for all ailments. We each ate a small dried apple guaranteed to cure our coughs and improve low immune levels.

As we walked down to the ferry, a dozen or more teenagers in school jackets rode their bikes off the ferry and past the racks of drying rice paper, going home for lunch. They would head back to school in an hour. They looked happy, but probably didn’t appreciate how lucky they were to be living in a time without war, free to enjoy festivities during these weeks leading up to Lunar New Year––to the year of the Happy and Lucky Dragon. 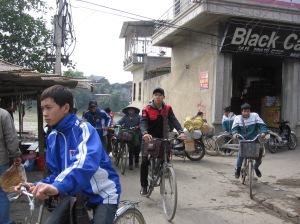 (Date of travel: the two weeks leading up to Lunar New Year, January 2012)

One thought on “Impressions of Vietnam”