We’ve been home from Italy for a few days now and I need to write up my stories.  But are there any stories?  We had no mishaps – the trip nice, the weather perfect.  I may have nothing more interesting than a travel brochure description.

“Do you want anything from Costco?”  My husband, putting together his shopping list, pulls me out of my reverie.

I laugh it off, but where was my brain that I couldn’t remember the word pesto? I better write a story before I forget that we even went to Italy.  Last night I found my folder of note papers that I used to jot down reminders on our tours.  When we got home, I couldn’t find my notes anywhere in my suitcase.  I felt lost myself.  But then they re-appeared on my desk, and now I’m happy.

I look through the little stack of three-inch by three-inch papers.  Papers small enough to carry in my flat shoulder bag.  Tour guides are a wealth of information, but facts don’t stick in my mind unless I take notes.  I smile when I see that the trees in Rome that one guide called Roman Pines are also called Umbrella Pines or Broccoli Trees according to Jon, one of the leaders on the Pompeii trip. It makes me laugh because when our sons were pre-school age, they loved to eat “little trees” of broccoli.

I see my notes on how to pronounce Trastevere, with the accent on the tev syllable, and that the Isle of Capri is pronounced by the locals as Cap‘ri, with the accent on cap.  Louise, the other guide on the bus to Pompeii, told us that.  It’s a long bus ride from Rome, time to say a lot of things.  Then I see a note that says, “Appian Way. 6000 crucified. Spartacus.  Mile marker every 1000 steps.” Interesting. Sounds sort of familiar.  I wonder if the bus went past the Appian Way.  I will have to look up more information in Wikipedia.

One of my notes says “Funiculi, Funicula. Song. Vesuvius. 1880 design. Early 1900s. Mafia.”  I remember only that it was an interesting story and guide Jonathan said the funicular is no longer there.  I google Vesuvius funicular and the story comes back to me. Completed in 1888, it worked great to carry people up the mountain. The happy song reflected the project’s success.  But the guides who had carted people up were less than happy, resenting the structure and their loss of income, so the local “enforcement agency,” as Jonathan called it, burned stations and cut tracks.  Several times.  The company kept re-building, and after Thomas Cook took over, tourists were taxed and fees paid to the guides.  In addition to the local Mafia’s activities, there were several earthquakes, and the earthquake damage is what finally did it in.  After a major temblor in 1944, the railway wasn’t rebuilt and so, like everyone else, we hiked up Mt. Vesuvius.  Which is beautiful, by the way.

The view is worth it.

The views overlooking the Bay of Naples are as stunning as the smoking crater itself. 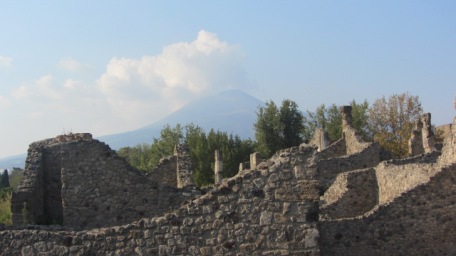 Pompeii did not disappoint. 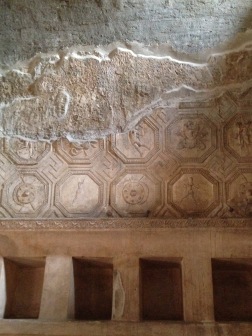 Inside a bath house

Note the paver pointing toward a brothel.

I see the next note: “Naples. Parthenia-died. Parthenians. Siren & Dionysis heard.”  Greek mythology I think, but I don’t plan to google that, because I have so many other things to look up.  I need to read more about Mithras, who Louise said was a pagan god who was born on December 25 and had twelve disciples.  I’ve read a little bit in Wikipedia and it seemed more complicated than she implied.  Her comments did make me wish we had another day in Rome, though, so we could take the Crypts and Catacombs Tour because they go down four levels in Rome, and even see a bit of charred wood from Nero’s era. And I still need to look up the number of churches in Rome, because Vivi on the walking tour said there were 400, and then Rafaella on the Colisseum tour said there were 900, and now Louise on the bus to Pompeii says there are more than a thousand churches in Rome.  All I know is, after three weeks in Italy we felt churched out.

I do regret that we got back from Pompeii too late to see the original Caravaggio painting of St. Peter’s crucifixion, which Louise said hangs in one of the churches at Piazza del Popolo, near where the bus dropped us off.  Too bad no one told us that in the morning, while we were waiting there for the tour bus to pick us up.  Maybe they forgot.

Maybe the guides can’t remember stuff any better than I can.  Maybe they should use little notes.  I pour myself a glass of wine and remember Italy.