The southbound 12:07 eased out from the San Francisco station, and I slowly relaxed in sync with the turning wheels. The station had been nervous-making, hectic and crowded except for the one corner that a homeless soul had commandeered while he methodically scratched up one side and then down the other side of his abdomen. 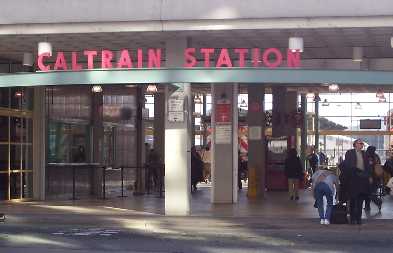 Like clockwork, after every two minutes of patterned scratching, he would move to a tall trashcan and spit out a wad of phlegm, then retreat to the bench and commence his routine again. I figured either that he was suffering from scabies, or that he had found a very effective way of having his own space.

In contrast to the noisy bustle of people streaming through the station, the train felt quiet. My husband and I sat back in our seats to enjoy the ride home after a weekend in the City.  The train was almost empty, and then we stopped at Millbrae, the station closest to the airport, and our car filled up.  Travelers filed on, polite and orderly––the way I like it––until . . .

“You’re not sorry! You always do this, Raymond.”  A young woman boarding the train was yelling at her man standing outside.  “I’ve had it with your shit!” Her voice was only slightly less brassy than her frizzy hair.  He was left standing on the platform with his mouth open, wordless.   The door closed while she limped to the last open seat, carrying a pair of crutches she never would use.

A big burly guy sitting across the aisle from us chuckled.  I barely heard him, but she did. The young woman turned and looked back the two rows at him, “Wha’cha laughin’ at?  I don’ like that arguin’ shit. People start stuff they don’ finish. Ya know?”

“I was just thinking how good-byes are hard, sometimes,” he said quietly.

He had come onto the train shortly after us, back at the San Francisco station.  I knew he was a sensitive sort.  I was sitting alone then while my husband Irv was off looking for a luggage car, and this big burly stranger offered me an Oreo. He held out a plastic tray filled with white frosted cookies. “Would you like a cookie? See, they’re Oreos.” He showed me the package.

“No, thanks. I just ate,” I responded.  It was OK with him; he continued to munch on those Oreos until they were gone. When Irv came back after a fruitless search, the guy commented on how much luggage we had, and he and Irv chatted about the advantages of train travel.  To Irv’s comment that a train allowed you to watch the scenery go by, the guy laughed, “It’s better than TV.”

Now, this big burly guy and the brash young woman started a conversation. She was seated a couple rows up and kept her head turned so she could yell over a couple in the middle who had also boarded at the airport and were engrossed across the aisle in a very upscale conversation about the difficulties of living and working in France.

“Yeah, goodbyes are hard,” the brassy young woman agreed. “But ya have to talk about it, ya know? What’s your name?”

“Hi. My name’s Sheila.” She stood and reached back to shake his hand. “Nice to meet ya. I gotta get outta here. Yep. Goin’ down to San Jose. Yep. San Ho. Where you goin’?” Her voice had a nervous intensity that pinned the other person in place.

“Redwood City.  Have to meet my probation officer.” His voice was as soft and understated as hers was brassy and loud.

Her face lit up. “I just got off probation! I was so happy to get probation.” She sing-songed, “Probation, probation, what’s the location?”  Then, “What’d you do? Here…” She handed him a light blue paper, and continued, “I ain’t ashamed of it.  I had two 487s for grand larceny.  Got busted for ID theft.”

“We better watch our bags,” I whispered and Irv gave a short, silent nod.

The pair continued to chat in their own jargon, comparing experiences. A couple of stops later, a seat opened up, and Abraham moved and sat down facing her. The middle-aged woman who had been sitting next to Sheila faked a phone call and moved to another car. Even though Sheila’s back was to us, it was hard to miss her half of the conversation.  But it didn’t seem to bother the other adjacent couple engaged in that totally different discussion about hot summers in France, and the difficulty of finding an open grocery store on Sundays.

Sheila asked, “Where ya livin’?”

“I just got out of jail,” Abraham responded.

She kept asking, always with the same response. Finally she told him that she wanted to know the exact date because she knew a broker who could arrange a place to stay.  He turned that down.

“Talkin’ to you is like playin’ a guessin’ game,” Sheila said, as she continued to fire rat-a-tat questions, “…so, ya got kids. How many? Two? One’s a boy? About eight?” Abraham answered each inquiry with one or two hushed words.

“Were they there for you when ya got out?” she asked.  “You need some lovin’.  Give me a hug.”  He stood and half-heartedly embraced her.  “No, a real hug.”  They stood and hugged.

“I was clean for 48 months,” Sheila replied. It didn’t sound to me as if she were referring to the immediate past.

Abraham commented, “You’re tryin’ hard to find things in common.” They did seem to have a lot in common. “What’d you do to your hand?” he wanted to know, looking at evidence of an injury.

Abraham laughed. “My wife tried to run me down once, too.”

“Let me give you my phone number.”

Sheila borrowed a pen and Abraham tore a piece off the brown paper Safeway bag that once held his Oreos.  Sheila wrote her number and said, “Next time you’re up this way, call and let me know how you’re doin’.”

“O.K.”  I was wondering if Abraham were wishing he had saved some of his Oreos for sharing.

Sheila stood and moved toward the door.  “Your stop’s next,” she told him.  I thought she might give him another hug or maybe even a kiss, but she didn’t.  They chatted, and then as the train pulled into the Redwood City stop, she limped back to her seat, reached in her bag, and quickly handed him what was left of a pack of cigarettes.  “They’re Marlboros.”

He mumbled, “Thanks,” and started toward the door.

“Here.” she handed him a book of matches. “Call me.” She sat down and didn’t look out.

He stepped off the train and, still smiling, walked away, dropping the empty paper bag with the corner torn off into a nearby garbage can.

In her friendly, caring way, Sheila continued to chat with the conductor and anyone else who looked her way. “This is our stop,” she told my husband and me, when we got to San Jose. “Diridon. They’re kicking everyone off now.”

We smiled and nodded, gathered our bags, and followed her as she limped up the ramp, crutches held high in the air.