I really didn’t know the water could be that blue, take-my-breath-away-beautiful blue.

On board the small boat, the handsome Greek captain stood at one end of the sitting/dining room and finished his safety briefing.  Then his voice took on a nervous quality; he had something to tell his 46 passengers that he seemed afraid to say.  “We cannot sail around the Cyclades Islands because there are gale-force winds in the Aegean and they are supposed to last all week.”

The ship could not sail if the winds were a Beaufort Scale above 7, and these were predicted to be 9 and 10.  Pointing to a newly-purchased map on the wall, he continued, “The only option is to go through the Corinth Canal, and sail around islands in the Ionian Sea.”  The Captain looked around the room, seeing long faces everywhere.  “We have no choice.”

Even before embarking, we had seen and learned so much on this Road Scholar trip.  Greece is rocky, even the beaches are stony. Our guide Myrto said that when the Gods finished creating the world, they had a bag of leftover rocks that they dumped, and that became Greece. 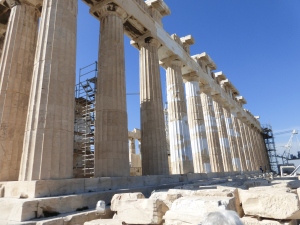 A mind-boggling amount of marble has been dug out of the mountains over the ages.  Tons and tons of marble––think of all the marble in museums around the world, in addition to those in Greece––and those same mountains are still giving up their marble.   Archeologists do an amazing job putting together jigsaw puzzles of pillars and statues from piles of rubble, reconstructing the Parthenon and other buildings on Acropolis, filling in missing pieces with new white marble, freshly quarried from nearby Pentelikon.  Myrto explained it all.

She showed us how the finest marble statues were carved to look almost transparent, how one can see the pure shape of the body under the folds of the gown, all out of one piece of marble.

She reconciled tales of myth with true history and made sure that we saw the most important items in each of the many museums.  My favorite was the Charioteer at Delphi, still holding the reins, the image of that bronze statue remains imprinted on my brain.  The history, the art–– it was all so interesting.  In truth, though, I have to admit that I don’t know Greek mythology and therefore much of what Myrto explained was “all Chinese to me,” as a Greek would say.

Just when we thought it couldn’t get any better, it did: we boarded our boat. The M/S Galileo looked like a pirate ship.

Dark polished wood with black trim, big sails wrapped tight against the tall masts.  It was beautiful.  But now the Captain’s message seemed to burst our bubble of good cheer.

Resigned, we sat on deck, layered up, pulling our jackets and hoods tight around us. Dark clouds hung overhead, the wind cold.   We would traverse the canal after dark, then sail all night to reach the Italy side of Greece.

A week later, sailing back during the daytime, we would snap photos of that narrow channel chiseled out of limestone, and see the plaque carved when Nero initiated building of the canal.

We woke up to a calm, bluer-than-blue Ionian Sea. Close to the first island of Zakinthos, the captain stood at the bow with his crew and pointed to a cove. 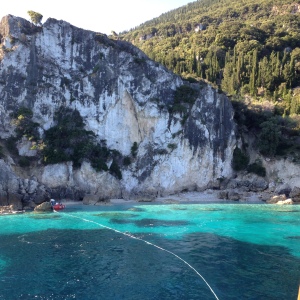 We heard the anchor drop, and watched as two crewmen pulled a heavy rope from the ship behind their orange rubber dinghy and tied it to a large rock near shore.  We saw no village.  Then the announcement was made: “Swim equipment is available on the port side of the lower deck.”  A sailor smiled and handed us a noodle as we stepped down and walked into the sea.  It was heaven.  The water felt cool and refreshing, not cold.  It was buoyant, but I didn’t give up my noodle. I bobbed around in 50-foot deep water without working too hard, enjoying the blue. 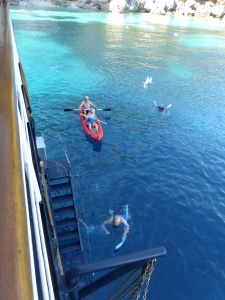 After lunch we ported at a small village where we seemed to be the only tourists. And that was our schedule, more or less, for the whole week––morning swims and afternoon sightseeing in villages with few other visitors.

Touring the west side of Greece gave us the opportunity to see Olympia, where piles of rubble lie undisturbed.  The site is big––acres filled with remnants of gymnasiums, practice rooms, and statue pedestals.  I could picture athletes moving around the area, getting ready for their events; now it is quiet and serene.  I loved, most, the field. Races were held in this wide-open area, spectators sitting on the surrounding slopes.  The only stone pieces in that field are the arched tunnel through which competitors would enter, and the strips of grooved stone that served as the starting blocks––still there, centuries later.

At one port, the captain shoe-horned the Galileo into a narrow spot between a yacht and a large ferry boat.  We passengers rimmed the upper deck, watching, sure that the space was too narrow.  The nervous owner of the yacht watched as well, and held out his arms as if to hold the Galileo away from his boat.   An old man on the dock gave hand signals to move left, now right, now left again.  After we were successfully docked, I saw our mild-mannered captain yelling at a couple of the sailors.  Was that old guy the dockmaster, his hand signals less than helpful?  Or was the Captain angry because the old man on the dock helped guide him in, rather than the crew taking the lead?

I had noticed, too, in Athens that Myrto shouted at the bus drivers, explaining where to wait and how to pick us up again.  Although all in Greek, their conversations sounded something like, “We’ll go to this village.” “No, that one.” “We’ll take a bus.” “We should walk.” “Let’s eat there.” “No, it’s too crowded.”  Always soft-spoken and friendly to our group, she never became upset with us, but to other Greeks she sounded rude.  Then again, I thought, maybe the drivers couldn’t hear that well over the traffic noise.

At the end of the week, one of our group confronted her: “You say that you and the boat’s excursion leader are friends, but you argue all the time.”  Then Myrto filled us in: Greeks just talk that way to one another; it’s not a reflection of anger at all.

An enthusiastic people, on a rocky land, in a sea of blue: the sky, the homes’ shutters and doors, yacht covers and boat trim, the flag.  And the water, always the blue, blue water. 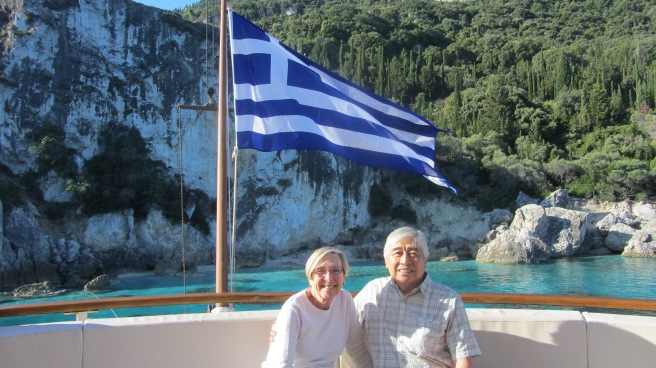 Tip of the day: If you go, be sure to order extra tzatziki sauce when in a restaurant. You won’t be sorry.