We have never heard the pretty name of Praha, but of course we’ve heard of the city’s English name: Prague.  We hear, “You’ll love Prague, it’s beautiful.” and “Three days is not enough time.”  We want to go, to see for ourselves, and that’s the reason we choose the Road Scholar bike trip that ends in Prague.

Sometimes when one hears so many superlatives, the location, or movie, or restaurant doesn’t live up to the hype.  Guess what?  Prague does.  Guess what else––we aren’t the only people who wanted to see Prague.  The main sights suffer from an excess of tourists, but that doesn’t stop us from enjoying our visit and happily spending more than a week there.

At the end of the bike trip, we stay two nights at a modest Best Western hotel a block from the Powder Tower, the name referring back to the days when gunpowder was stored there.  The hotel is so-so as far as comfort, but the buffet breakfast is the best that we have in three weeks of travel.  An abundance of fresh fruit and many other choices.

Following a guide through the Old City on a walking tour seems easy.  But when we start back on our own from the Charles Bridge, the streets become confusing, filled with thousands of tourists from all over the world.  We concentrate so much on finding our street that we forget to go back and buy a cone of warm hand-made potato chips.  We ask a street cleaner directions to a certain street that we know leads back to the Powder Tower, but he sends us in the wrong direction.   He understands English as much as we understand Czech, or maybe it’s my accent.

A highlight of the area is the Old Town Hall Astronomical Clock.  The hourly show that moves figures around lasts less than a minute but draws a big crowd. (Hear it here.) The intricate detail of the clock itself is worth seeing; the crowds distracting. I watched the lady in black for about 20 minutes, and she never did get her perfect selfie.  Nor did she ever look at the clock. 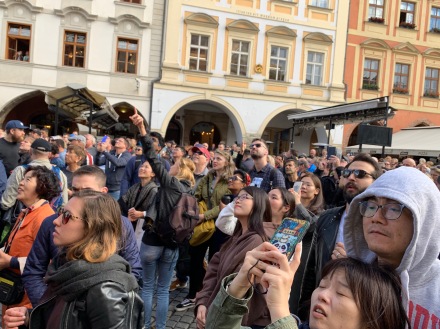 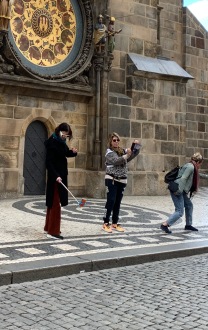 Behind the crowd is a stand where you can buy freshly made, warm potato chips.

A walk through the old part of town and the crowded clock tower square gets you to the lovely Charles bridge.

Only a rare guide here and there shout out the details about history or a historical building, most tourists throng the bridge behind a guide with listening devices in their ears.  And thank goodness our guide talks to us via a listening device stuck in our ear.  Otherwise, how would we learn that all public transportation is free to people over 70 (carry your ID to show if  challenged).  The tip about the trams being free is the best tip of the day.

One day isn’t enough time in this beautiful city, and after a weekend away, we’re back for another week with Road Scholar––this one an “Independent” tour with plenty of free time.  Yes, one can see the main sights in one day––Charles Bridge, the Powder Tower and the clock in the square––but one needs time to allow a gentle soak of all the history in Prague, long the capital of Bohemia. 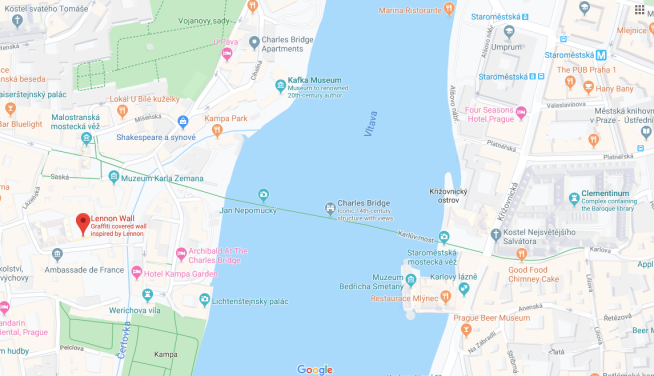 At the far end of the Charles Bridge is a pretty area known as Kampa.  More peaceful than the bridge and clock tower, but equally interesting:  Kampa Island,

At first I’m impressed that Good King Wenceslas was really a person, and was really a good king.  It takes me three days to realize that a street spelled Václavské is actually “Wenceslas” in the difficult Czech language.  We re-visit Wenceslas Square and take another look at the good king.

I can’t tell him from the good King Charles IV, for whom the university, the bridge, and much more is named.  Maybe if the two statues were side-by-side, . . .. 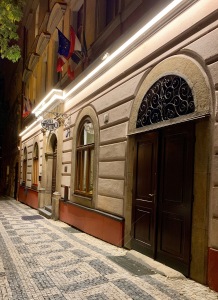 Our hotel the second time around is a small, family-owned boutique hotel, Hotel Petr, a large private home that had been chopped up into apartments during the Soviet era and then reclaimed by the family when the Communists left.  The hotel is close to a tram stop, and after a couple days, we know how to read the postings at the tram stop and to understand the tram system.  We ride free because we’re lucky to be old, and never wait more than 15 minutes for a tram.

The hotel is located in the Malá Strana or the Lesser Town area, across the street from a lovely garden and park-like area covering the hillside beneath the Petrin Tower.  On Újezd street, at the base of the Petrin hill, is a graphic memorial.

On a rainy day, we hike up the steps to Pražský hrad, have a nice lunch at the castle’s Terrace Cafe and then hear a concert by professional musicians in an elegant drawing room of the Lobkowicz Palace on the castle grounds. 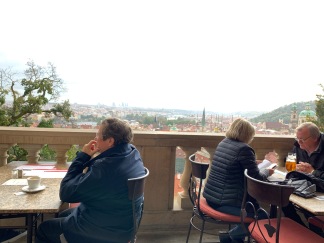 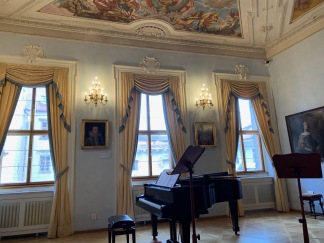 When we hear the name of their beloved composer, Antonín Dvořák, I have to ask, “Where does the “zh” sound come from?”  Turns out the mark above the r indicates the “soft” sound zha(h)k that follows.  Not an easy language to hear, nor to translate spoken words to the names of tram stops.  One week is not enough time to absorb the language.

The best part of our “independent” week is trying different restaurants and moving to our own schedule.  This time around, we take time to buy warm potato chips in the town square and to stop for photos without the worry of losing our guide.  Culture abounds.

Historical sites and churches offer an abundance of concerts, provided by skilled musicians.  In addition to concerts at the castle and Dvořák museum, we hear a concert featuring Vivaldi in the Mirror Chapel of St. Clement Cathedral.

On our own, we eat at restaurants recommended by tour guides or the hotel, like Zubajda.

Twice we eat at the popular Kolkovna Olympia, a local chain.  We eat at the one on Vitézná Street, close to Most Legií, the bridge that leads to the National Theater.

Before our theater outing, we ate at the restaurant immediately across the street, Cafe Slavia.  The service can be so-so.  The food’s good, but we found the servers a bit arrogant, or perhaps dis-interested in serving us.  We heard some of our traveling companions say they gave up after several minutes of not seeing a waiter, and walked out.

At the National Theater, we see For the Love of Three Oranges, supposedly a comedy but the language barrier and trite jokes or simplistic acting prompt us to leave at intermission.  That’s OK – we only bought tickets so we could see the theater itself, and it doesn’t disappoint. The intermission areas behind each level of seating are something to behold. 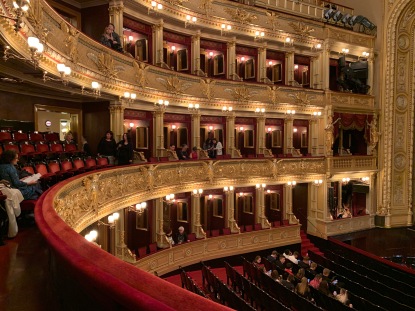 Inside the National Theater 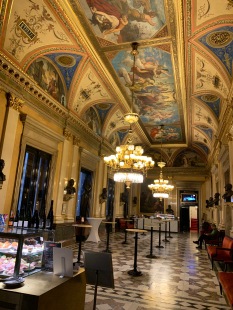 Intermission area behind each tier

On another evening we have a good Italian dinner on a docked boat that houses the Marina Ristorante.

Nice setting and good food, and a great way to end the day after a peaceful stroll along the river. 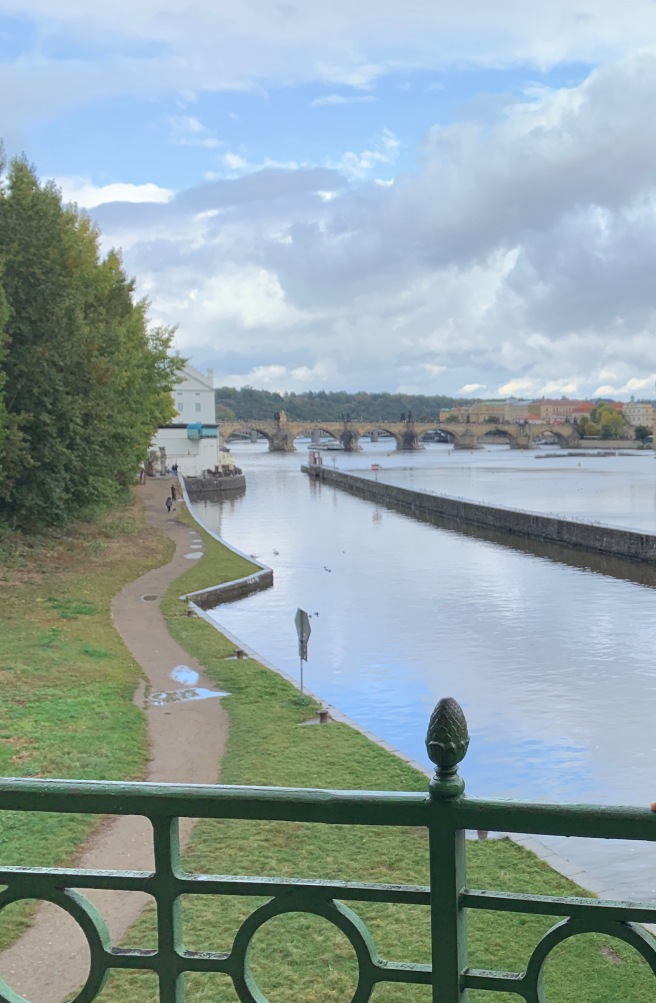 If you’re a photographer, you’ll love the architectural detail. 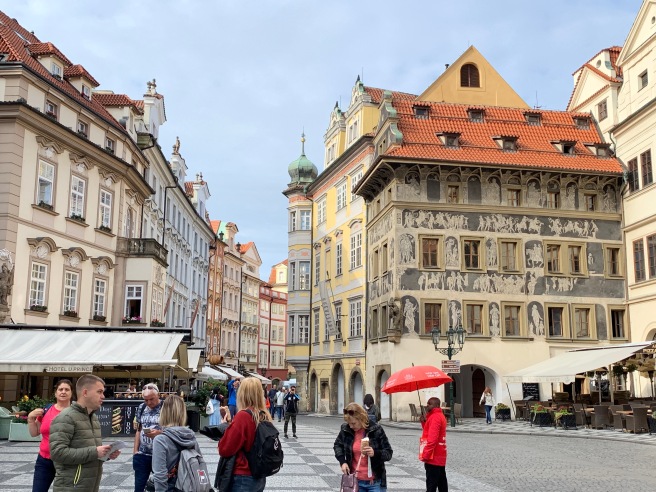 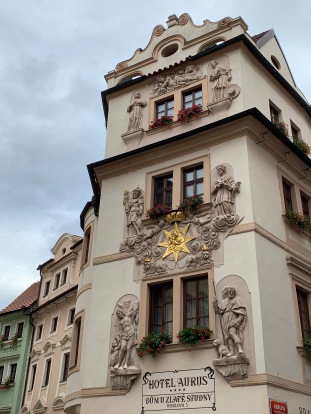 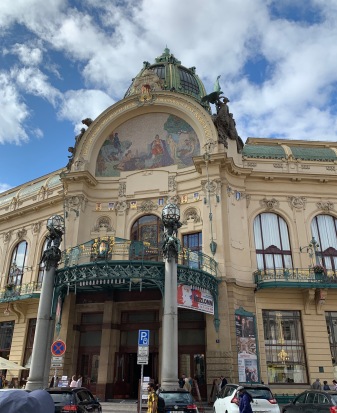 Bottom line: Road Scholar’s “Independent” tours are a great way to see a city on your own terms, with just enough help to get to the right places. 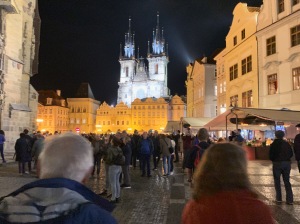 Road Scholar’s A Cycling Journey: The Elbe River From Germany to Czech Republic

7 thoughts on “In Czechia, it’s Praha”