Fiji!  The last few days of our trip “down under.”  Brother-in-law Bob heads for the money exchange desk at Nadi airport, and comes back with––a $7 bill?  We laugh.

“They have a seven-dollar bill in Fiji?  Who knew?”

A couple of days later, buying a $1 coconut trinket at a shop on Denarau Island, Bob hears the woman say, “You want to spend this?”  Anita thinks the shop doesn’t want to break $7 for something so inexpensive, and is about to argue that it is the smallest bill they have.  But no, the gracious young clerk explains that it’s lucky.  People don’t spend them, they keep them for good luck.  How nice of her!

Turns out that the seven-dollar note is super special, commissioned by the Fiji government after their Rugby Sevens team won the Olympic gold in Rio.  It was Fiji’s first medal ever, and made the players national heroes. 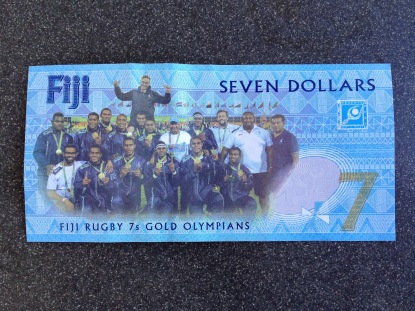 “The banknotes, which are legal tender and are the only known $7 notes in circulation in any country, were released through bank branches on Friday.” (The West Australian, Thursday, 20 April 2017)  Fiji’s Reserve Bank also issued a fifty-cent piece commemorating the team’s victory and their coach Ben Ryan.

Rugby sevens, a faster moving version of rugby that is popular in the South Pacific, was a new sport at the 2016 Olympics, but not new to Fiji.  It wasn’t luck though, that got them the medal––it was hard work.   Check it out: Fiji Sevens training regimen.

Other YouTube videos highlight the spirit and pride that Fijians share in their rugby sevens team.  (Screen shots taken from HSBC Sport video (17:27)).

In highland villages with no electricity, the one home with a generator and a television becomes a magnet when the team is playing. 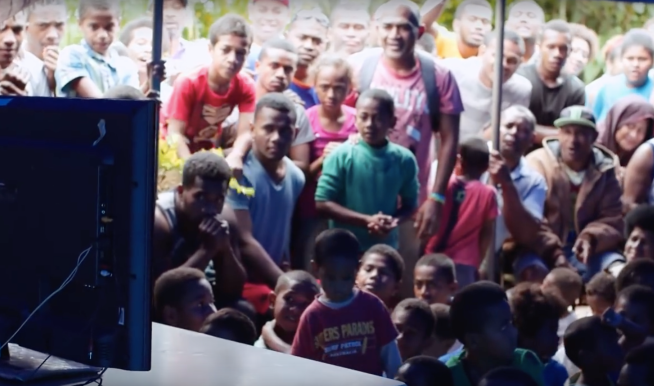 Everybody piles in, even crowding at the windows, to watch.

Bob plans to frame the $7 note for his office wall.

For all of us, it was one last bit of the good karma that we had enjoyed on this entire trip “down under.”